”This has not been a good weekend in terms of the results we achieved with the speed that we had. But we are bringing the positive parts with us, with Mikael qualifying on the front row, Robin taking another big step forward and Oliver’s podium,” said Fredrik Lestrup, co-owner of Lestrup Racing Team.

Oliver Söderström claimed a podium finish with third in the second race, but was involved in an incident in the first race and he stalled at the start of the third race due to a technical issue.

”It’s been a very tough weekend. We’ve had the pace all weekend but have just not been able to capitalise on it properly. It felt good to be on the podium but we deserved more than the overall result that we got. We need to bring the positive parts with us and reload for the next race,” said Oliver Söderström, who keeps fifth in the drivers’ standings.

Mikael Karlsson looked set for a podium finish in the first race as he crossed the finishing line in third, only to receive a penalty for contact with another driver, dropping him to fourth.

”We had the speed to fight for the podium, unfortunately I made terrible start in the first race and got a penalty that I don’t entirely agree with. But that’s racing sometimes. I had a technical issue in the final race and lost too much time. We’re bringing all of this with us to the next race where we will try to score as much points as possible,” said Mikael Karlsson.

Robin Knutsson took yet another leap forward, finishing fifth in the first race and chased down points leader Robert Dahlgren in the final race.

”I am incredibly pleased with the weekend. It’s so much more fun to be able to fight higher up the order and show that I can be part of the top fight further on. I’m really looking forward to Anderstorp where I am going to try and keep the momentum from here,” said Robin Knutsson.

Lestrup Racing Team by Volkswagen Stockholm keeps second place in the teams’ standings and Oliver Söderström keeps the lead of the junior championship ahead of the coming round at Anderstorp on September 4-5.

”It has been a tough weekend but we are going to keep fighting hard ahead of the next race at Anderstorp where we completed a very positive private test earlier this month,” said Fredrik Lestrup. 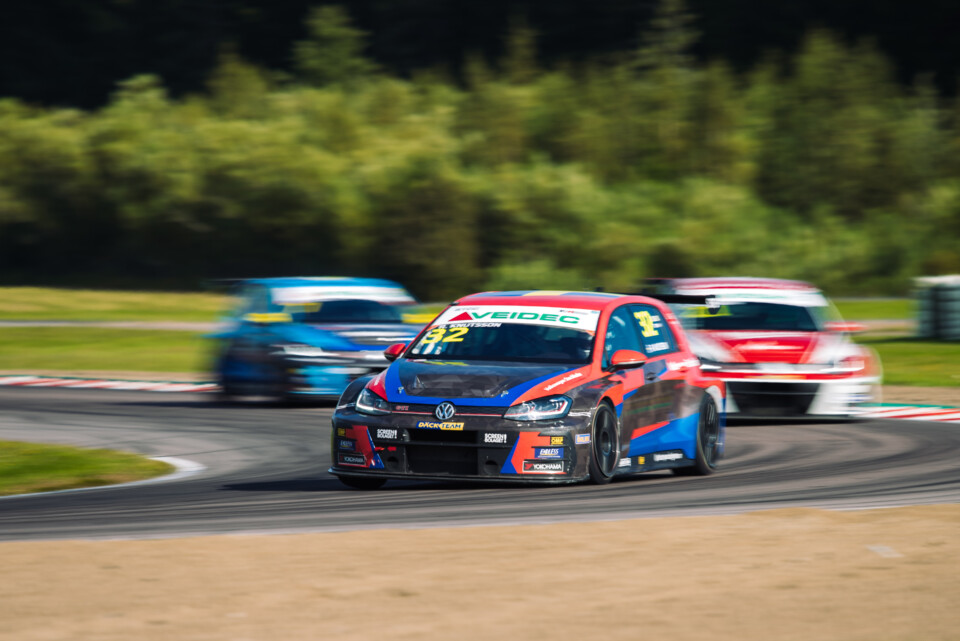 ”My lap was really good and I thought it was enough for pole, but unfortunately Dahlgren went a bit quicker. But this was my so far best result, so we’re moving forward and the team has done a great job. My goal for the races is still set on the podium,” said Mikael Karlsson.

Team-mate Oliver Söderström was fourth fastest in the first qualifying session (Q1) and improved to third for the second session.

”I’m a bit frustrated, I thought we would have more pace. But we had some understeer as we didn’t know how the car would react on new tyres after running on older tyres during testing. We made some improvements for Q2 and the car felt better. But we have a strong race car and I hope to be able to climb,” said Oliver Söderström.

Robin Knutsson also claimed a new personal best qualifying result with seventh in both sessions, making it onto the second qualifying session for the first time ever.

”I felt really confident in the car and it feels great to have made it to Q2. What I’m most excited about is that I finally have the same speed as the mid-field drivers, so that I can fight with them. It’s going to be really interesting tomorrow,” said Robin Knutsson.

The first race of the STCC weekend at Gelleråsen Arena starts at 10:50 CEST tomorrow and is broadcast LIVE on: plus.stcc.se 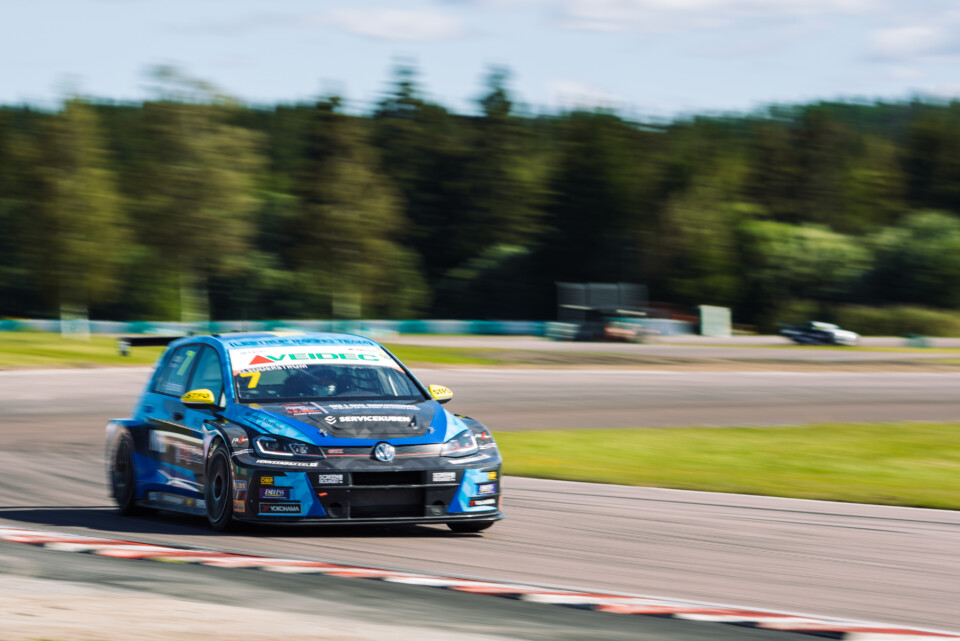 Lestrup Racing Team heads for the third STCC TCR Scandinavia round at Gelleråsen Arena this weekend, strengthened by a successful summer test at the same circuit and an additional test at Anderstorp. The goal is firmly set to catch and pass the competitors in the standings.

Oliver Söderström, currently placed fifth overall, was just 29 thousands of a second from the top time during the test and is keen to gain lost ground.

”The fight back up the order starts now,” said Oliver Söderström.

”I think we are looking strong ahead of Gelleråsen, especially after the successful test we had there. I won a race here last year and that’s my goal for this weekend, although I know it will be very tough.”

Mikael Karlsson was even closer to the top during the summer test, lapping just 0.006 seconds slower than the fastest time.

And the Volkswagen Golf GTI TCR driver is keen to do well during his home race.

”I want to beat my personal best STCC result and claim a podium finish this weekend,” said Mikael Karlsson.

”We got plenty of laps done during the test and got a lot of answers to questions that we had. I have a good feeling ahead of the race weekend.”

Robin Knutsson is continuing his hard work forward in what is his first-ever STCC season and comes boosted by a strong test.

”The test at Gelleråsen was my best so far, we found a lot of time and we were much closer to our competitors than before,” said Robin Knutsson.

”My confidence has increased a lot and I think we have a good shot at challenging for the top six this weekend.”

”We have a lot of hard work ahead of us to gain on our competitors and we come strengthened by two successful tests last week,” said Fredrik Lestrup, co-owner of Lestrup Racing Team.

”We are obviously not happy with being behind at this stage in the season, but we are going to keep our heads down and keep pushing – we won’t stop until we are first.

”Gelleråsen is a circuit where we have scored strongly in the past and if we play our cards right this weekend, there is no reason we cannot keep delivering at the very top.”

The STCC races at Gelleråsen Arena are broadcast LIVE on: plus.stcc.se

”The test has gone really well and we completed well over 130 laps. We had some brake issues during the previous race at Skellefteå that we have solved now as well. The coming race at Gelleråsen is my home race and my goal is to beat my so far best STCC result which is fourth position,” said Mikael Karlsson.

Oliver Söderström was very close to his team-mate in third position, just 0.029 seconds from P1.

”I think we’re looking strong ahead of the races at Gelleråsen. We’ve done plenty of laps with both qualifying and race simulations, getting through our complete test plan. I look forward to the races, especially as I won here last year – but it will no doubt be very tough,” said Oliver Söderström.

”We’ve had two solid days of productive and trouble-free testing. The pressure is on now to deliver as we head into the final part of the calendar. We need to claw back points on our competitors and the test has definitely boosted our confidence ahead of the challenges to come,” said Fredrik Lestrup, co-owner of Lestrup Racing Team.

The team will complete another test at Anderstorp ahead of the third STCC race weekend of 2021 at Gelleråsen Arena on August 21-22. 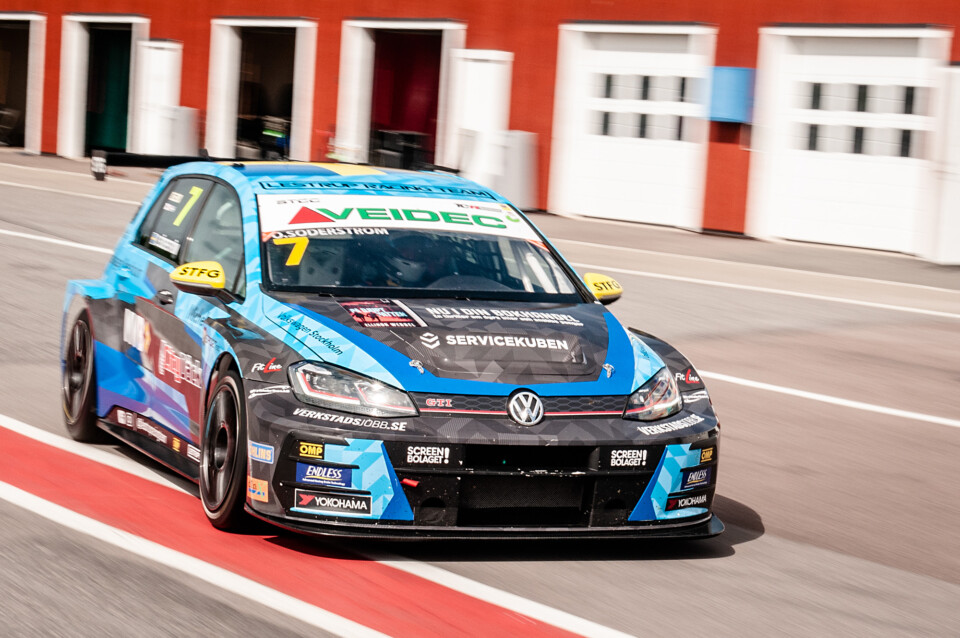