Oliver Söderström continued his impressive string of consistent results, finishing third in the final two races and has not finished below fourth position so far this year.

”We’ve had a solid weekend in total with strong points and two podiums, which should have been three. I don’t agree on the jump start penalty withdrawal for Hugo Nerman. But that’s not for me to judge and I’m excited to head for my home race at Knutstorp next up where I hope to bag even more points,” said Oliver Söderström.

The Audi driver was set for a podium finish in the first race as rival driver Hugo Nerman was disqualified for jumping the start, only for the stewards to retract the penalty after the race – demoting Oliver Söderström to fourth.

Andreas Bäckman claimed his first podium finish for Lestrup Racing Team in the first race with a third place finish.

And the Swede looked set for another podium finish in the third race, fighting for second place with Tobias Brink, when unfortunately one of his tyres blew with just two laps left.

”I had a bit of bad luck in the races today, but the speed was there – especially in race three. The puncture was a shame, but still a lot of positives to bring with me from this weekend. A huge thanks to the team for the support and the progress that we have made since the first race,” said Andreas Bäckman.

”I’m proud over the result that the team, Oliver and Andreas have been able to secure, especially considering the race against time that we’ve had with our new cars. With that said, I definitely think we had the potential to leave with a stronger result than this. But the speed is there and we are going to work hard to capitalise better on this for the coming round at Knutstorp,” said Fredrik Lestrup, team co-founder.

The next STCC TCR Scandinavia race takes place at Knutstorp in the south of Sweden on July 22-23. 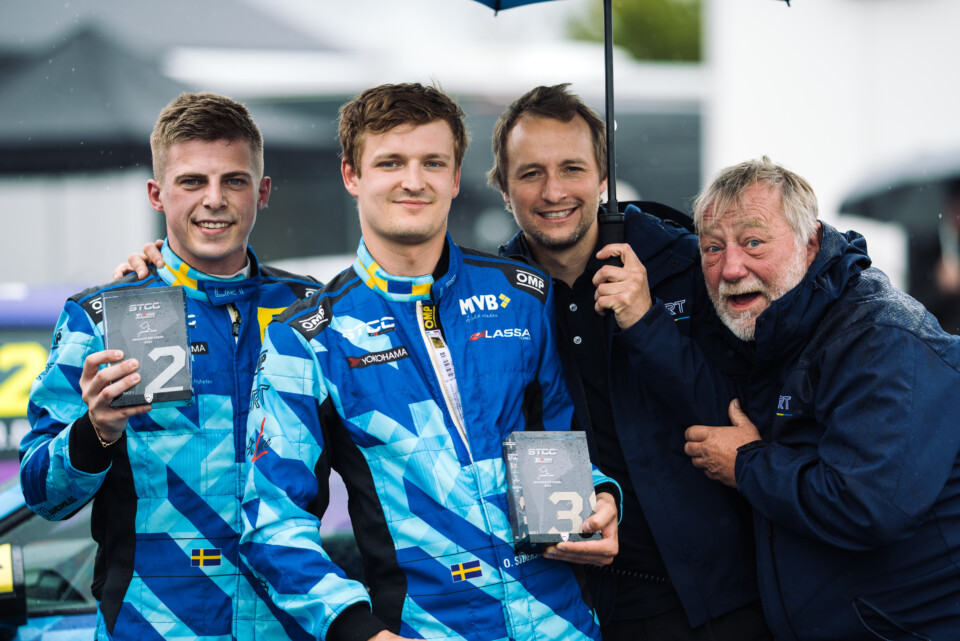 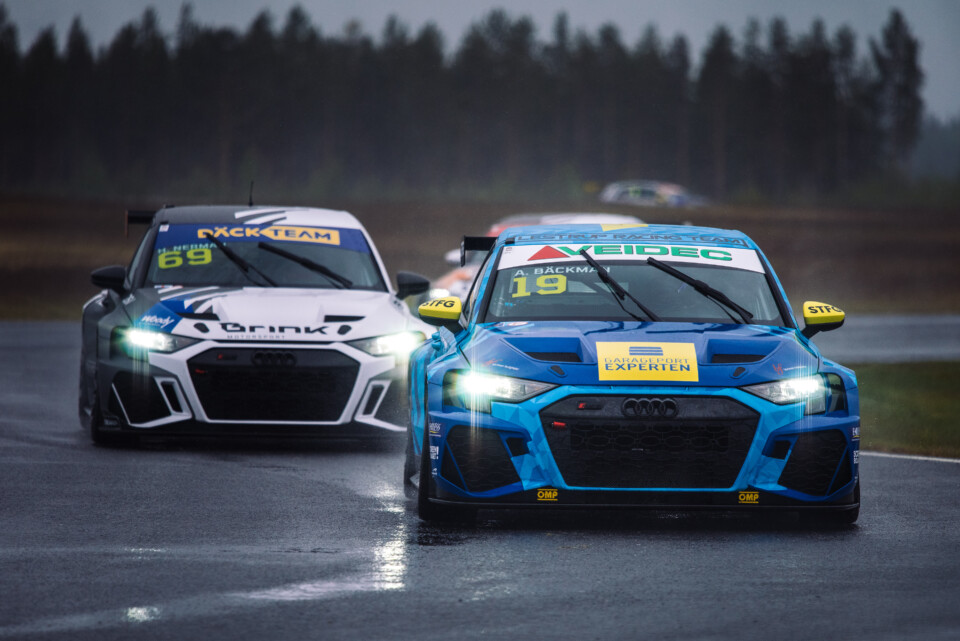 ”It’s been a really good day today. I’ve felt comfortable in the car all day, despite this being a new track for me where my competitors have raced for many years. Everything just fell in place today and I’m really looking forward to the races tomorrow,” said Andreas Bäckman.

Team-mate Oliver Söderström made it two Lestrup Racing Team Audis in the top five, securing fifth in the first session and second in Q2.

”I’m not pleased with the result of today personally, but I’m happy for Andreas and the team in total. We’ve got a challenging day ahead tomorrow as the forecast says heavy rain, should make for some really entertaining races,” said Oliver Söderström.

Three races are scheduled for tomorrow, the first one starts at 12:55 CEST and is broadcast LIVE on: plus.stcc.se 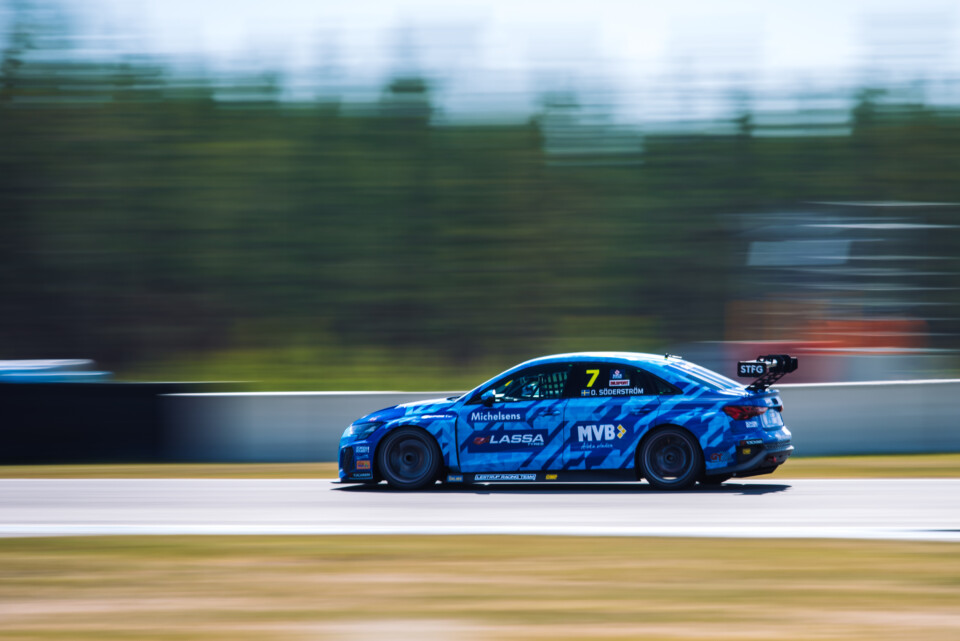 Lestrup Racing Team heads to the very north of Sweden where the sun barely sets for the second STCC TCR Scandinavia round, chasing victories during the Midnight Sun Race.

”We got a lot of positives from the Ljungbyhed opener but nobody in the team is pleased until we are on the top step of the podium. We know where we need to improve and we are working hard on this ahead of Skellefteå. The conditions are there for us to take a step further forward in the results and that is where our goal is for this weekend,” said Fredrik Lestrup, co-founder of Lestrup Racing Team.

The Skellefteå round also means that the STCC race format returns from just one race in Ljungbyhed to three races this weekend.

Oliver Söderström, who finished third in the season opener, is aiming two places higher this weekend.

”Third was an okay start to the season, but to be honest, I’m not pleased. I want to win, as always. If we just can improve our race pace, then I think we can seriously attack for victories this weekend. We are going to continue to work hard and I’m really looking forward to it,” said Oliver Söderström.

Andreas Bäckman had a tough but promising start to the season, his first STCC TCR Scandinavia race for Lestrup Racing Team.

The Swede started further down on the grid after a mistake in qualifying, but fought his way up through the field to finish fifth.

”The first race didn’t really end like I hoped, but the car was quick and I could make progress up the field at Ljungbyhed which is a hard track to overtake on. And that’s what I’m bringing to Skellefteå. I’m just as for the previous race lacking experience of the Skellefteå circuit, but my goal is to extract as much as possible from the car in qualifying and then fight for the podium in all three races,” said Andreas Bäckman.

The Skellefteå race weekend starts on Friday with testing and qualifying, followed by three races on Saturday from early afternoon to late evening – all broadcast LIVE on: plus.stcc.se 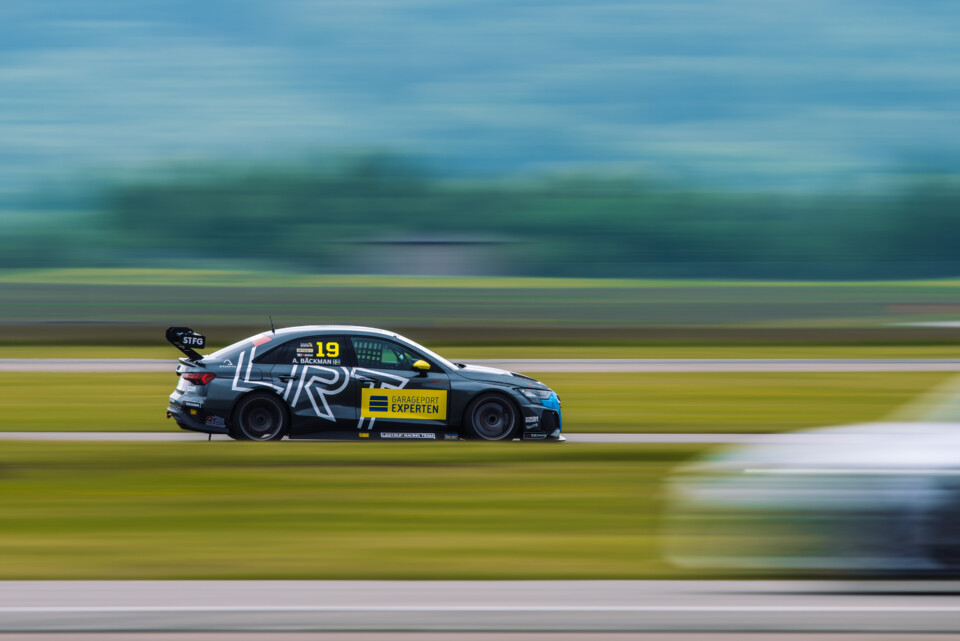 ”To qualify second with a brand new Audi that we got less than a month ago feels amazing. I lost one place at the start unfortunately, that’s never enjoyable. I wasn’t quite happy with the balance of the car, but I am really pleased to finish on the podium and a huge thanks to everyone in the team as they’ve worked around the clock ahead of the premiere,” said Oliver Söderström.

Team-mate Andreas Bäckman made his STCC debut for Lestrup Racing Team this weekend, having never previously raced at the Ljungbyhed circuit.

The 26-year-old qualified tenth after a mistake on his Super Pole lap, then fought his way up through the field to finish a strong fifth behind the wheel of his brand new Audi RS 3 LMS II.

”It was a really exciting race where I fought my way from tenth to fifth. Unfortunately the top four had broken away by then, so I had to focus on just taking the car home after that. It’s been a tough weekend for me as I’ve never raced here before, but the overall results from this weekend bodes well for the coming races,” said Andreas Bäckman.

Lestrup Racing Team leaves the STCC opener in third place of the teams’ standings while Oliver Söderström is placed third in the drivers’ championship and Andreas Bäckman fifth.

”We’re never pleased until we are on top of the podium, but I think we can head home pleased considering the circumstances. We’ve only started to scratch the surface of our new Audis and we have plenty of data to digest and evolve for the next race in Skellefteå where we will push for more podiums,” said Fredrik Lestrup, team co-founder.

The next STCC TCR Scandinavia race takes place on June 17-18 at Skellefteå. 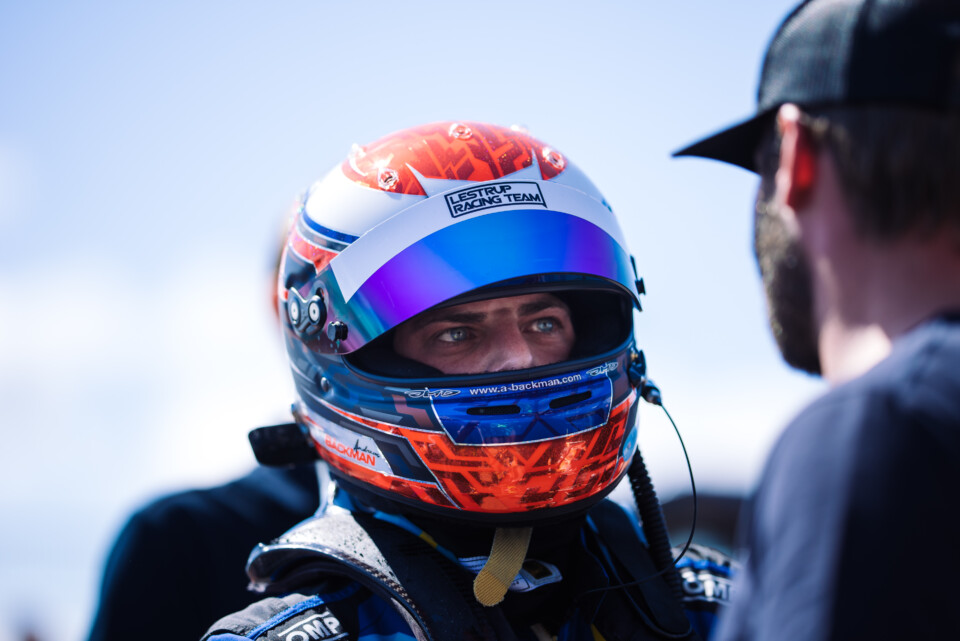 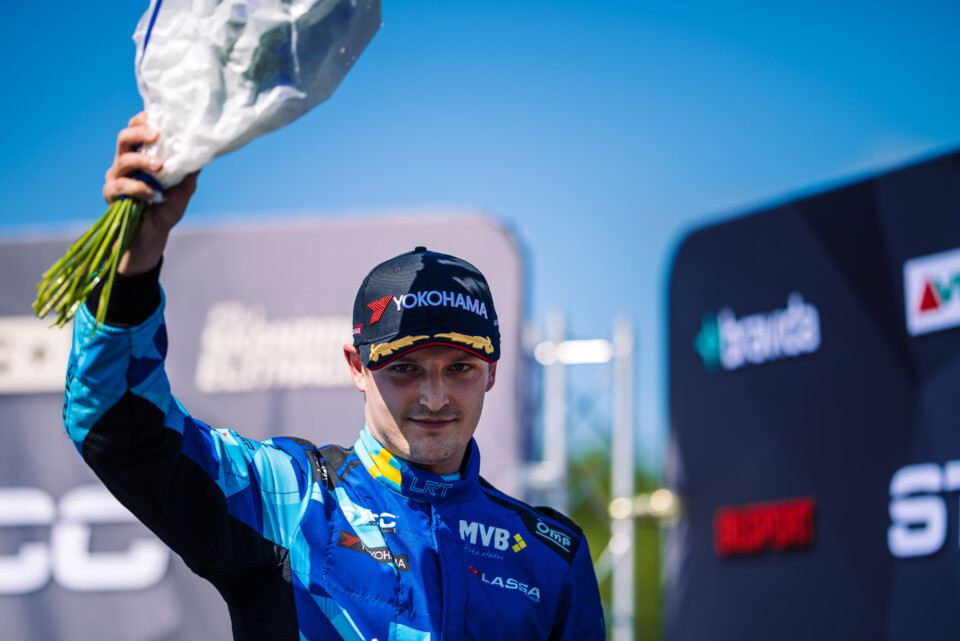 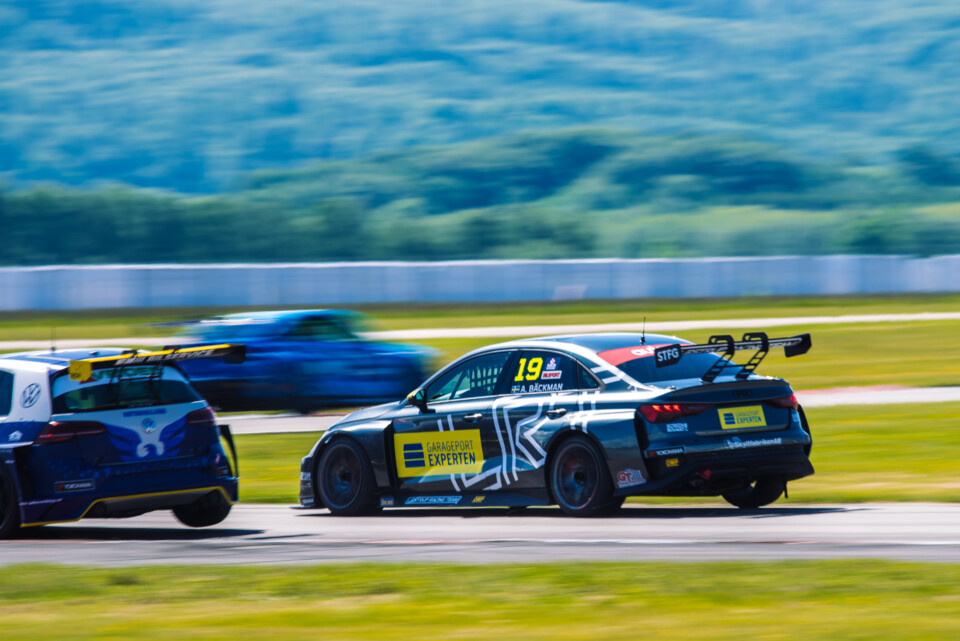 Lestrup Racing Team will start a new Audi chapter in the 2022 STCC TCR Scandinavia premiere at Ljungbyhed this weekend.

Drivers Oliver Söderström and Andreas Bäckman will take on a bigger and stronger STCC field behind the wheel of two Audi RS 3 LMS of the new generation, coming from a strong Hockenheim endurance race two weeks ago.

”We are excited and motivated ahead of the STCC season start which will mark a new era for us with a brand new and highly competitive Audi model,” said Fredrik Lestrup, team co-founder.

”The endurance race in Germany was a perfect rehearsal for us with the new cars, but with that said, we have a lot of information still to digest and we will face competitors with more track time in their cars. It’s no doubt going to be tough this year. Our goal is nonetheless set on fighting for the titles, we are here to win.”

Oliver Söderström claimed the junior title and finished fourth overall last year behind the wheel of the older Volkswagen model.

”This season is going to be crazy exciting and we’re going all in,” said Oliver Söderström.

”Hockenheim was really good for us to get laps in the car and to get to know it. I think that me and Andreas [Bäckman] will be really close, that’s going to spur us both forward. The goal this year is to win and we’ve got strong conditions with the new Audi.”

Andreas Bäckman made his debut for Lestrup Racing Team in the Hockenheim endurance race, finishing on the podium together with team-mate Oliver Söderström.

”I feel ready for the season start, but I think it’s going to be challenging for me as I’ve never raced at Ljungbyhed before,” said Andreas Bäckman.

”Hockenheim was really important for me as I could get to know the new Audi and get to know the team. And the fact that we were able to secure a podium is something we all bring with us to the first STCC race. My goal is to learn the track as quickly as possible and work together with the team to secure a strong result.”

The Ljungbyhed opener will feature a unique format of a single-lap ”Super Pole” qualifying and a single race of 18 laps. The remaining races will just as last year feature three races per weekend.

Watch the races LIVE via: plus.stcc.se